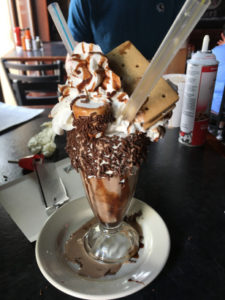 By now I’m sure you’ve seen pictures from one establishment or another offering over-the-top milkshakes.  They seem to be all the rage, and as someone with a super sweet tooth, I can’t help but stare at my Instagram feed in awe every time one pops up.  But unfortunately, these decadent dessert treats often contain mounds of cookies, brownies, cakes, and other gluten-full delights, making them only safe to look at for someone on a gluten-free diet.  There have been several occasions when I’ve ventured out with friends to try the newest “it place” for milkshakes, and watched with envy as they carefully developed a plan of attack for their extraordinary treat, while I sat by eating my delicious, but safe and boring ice cream.

Thanks to The Lazy Boy Saloon and Ale House located in White Plains, NY, I no longer have to watch my friends indulge!  A little over a year ago, Lazy Boy began offering several gluten-full milkshakes.  This past summer, they added a gluten-free s’more milkshake to their menu.  This incredible milk shake is chocolate based, and is served with a vanilla frosting rim covered in chocolate sprinkles.  On top of the shake sits a generous helping of whipped cream, chocolate covered marshmallows, and the finishing touch, a gluten-free graham cracker s’more.  I had the opportunity of making one myself with the owner, and of course, taste-testing our creation.  Wow!  What a treat!  I definitely recommend heading to Lazy Boy next time you’re in a milkshake mood.

When you have to constantly give thought to what you’re eating, dining out can be an unnerving experience.  Prior to going gluten-free, I never thought twice about where I was eating, or what I was going to order.  Now I have developed a routine of pre-screening menus, reading online reviews about allergy friendliness, and sometimes calling an establishment prior to dining out.  Even when you’ve done your research, there are so many variables that can present themselves during a meal, which can cause a  fun night out to quickly turn to a stressful endeavor.  However, this was not the case during my recent visit to Maggiano’s Little Italy.

Maggiano’s is a casual dining restaurant chain offering a large Italian menu, with both family style and individual dishes.  I was first introduced to Maggiano’s in 2006 while attending college in Philadelphia, PA.  The Philly location quickly became a favorite of my whole family’s, and we regularly visited when my parents were in town.  Back then, I was still eating gluten, and sampled many times on the menu.  A few weeks ago, I found myself back in Philadelphia, this time to cheer on a close friend who was running a half-marathon.  The night before the race, my friend had one requirement when selecting a restaurant, they must serve large portions of pasta.  I immediately thought of Maggiano’s and was ecstatic to learn they now offered many gluten-free options, including pasta!  We made a reservation, and headed from the hotel to the restaurant located at 12th and Filbert St.

While my food was fantastic, and I will discuss that in a bit, what really set this dining experience apart was the service.  As has become routine, after listening to the waitress go over her introductions, I immediately informed her that I was gluten-free, and asked for some guidance with the menu.  With a huge smile on her face (and not the look of annoyance I’ve gotten elsewhere) she informed me that they are a “from scratch” restaurant.  This means that every item is made from scratch, and if there is something on the menu that catches my eye that isn’t gluten-free, they can modify it so it is safe for me to eat.  She used the chicken parmesan as an example, informing me that the dish could be prepared with grilled chicken and topped with cheese and sauce.  They also had gluten-free pasta, which could be substituted for almost any of the pasta dishes on the menu.  While I would have been satisfied with this response alone, several minutes after placing my order, the manager came to our table.  She informed us that my order had been placed, was labeled as a special allergy dish noting it needed to be gluten-free, and the chef had been informed.  The manager assured me, without my prompting, that my meal was being prepared with every precaution, and if I needed anything at all or had any questions or special requests, she was available.  I was shocked!  I have had good service before, and have a list of restaurants I would recommend as good gluten-free dining options, but Maggiano’s went above and beyond to make sure that not only was I receiving a meal I could eat, but that I was comfortable and at ease in their dining room.

So what I did I eat?  I ordered the Taylor Street Baked Ziti with gluten-free pasta, featured in the picture above.  As stated on the menu, this dish is made with Italian Sausage, Pomodoro Sauce, and an Italian Cheese Blend.  My meal was great!  With my friend talking about pasta so much prior to arriving at the restaurant, I had developed my own craving for a pasta dish, which was more than satisfied by my choice. The consistency of the pasta was perfect, and the cheese was melted so that it was evenly spread throughout the dish.  The sausage had a great flavor, and really enhanced the baked ziti.

Overall, there are not enough good things I can say about my dining experience at Maggiano’s.  The only negative is that there is not a Maggiano’s closer to where I live.