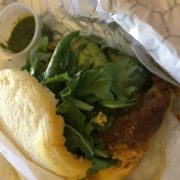 After years of feeling sick after eating, I became less daring in my food choices. This is not to say the food I eat is dull food, or that certain foods are bold. Simply, I learned not to try new things for fear of how my body would react. Since discovering gluten was the problem and removing it from my diet, I once again find myself being “daring” while eating, and am making it a point to try new things.

I was meeting a friend for a baseball game, and was planning to buy food at the stadium, when she called with another idea. For weeks now, my group of friends and I have been discussing Turnstyle Underground Market at Columbus Circle. Turnstyle is just what it’s name says, an underground market located beneath 8th Avenue between 57th and 58th Street in New York City. According to their website, they currently feature 38 eateries, 18 food vendors, 15 retail stores, and 5 kiosks. This underground market has been getting a lot of buzz lately, and was even part of a question in a local trivia event I attend every week.

My friend had originally called to tell me she was stopping at Turnstyle before heading to Yankee Stadium (Go Yanks!), and was planning to get an Arepa for herself at Arepa Factory. I had never had one before, and without knowing much about them or the restaurant, I slipped into my old ways of avoiding new food, and I told her I was just going to grab my usual at the Stadium. Maybe 30 second later, my phone went off, and I received a text message of the picture featured below. The full menu is gluten free! Before I could respond, my friend called back, and began reading off the menu items so I could order my dinner. I decided on a custom Arepa with shredded chicken, avocado, sweet plantains, arugula and goat cheese. I opted for the green sauce (cilantro) on the side, since I wasn’t eating my Arepa immediately, and wasn’t sure if it would get soggy. 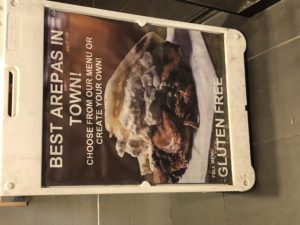 It took me some time to get to the stadium, and settled in for some rivalry baseball (The Yankees beat the Red Sox!), but I finally got to try my Arepa. Not going to lie, I’m hooked! It was so good, filling, and held up on its journey from Manhattan to The Bronx. The Arepa itself is a corn patty that was sliced to make a sandwich of my selected ingredients. Everything was seasoned perfectly, the ingredients were very fresh, and my only complaint is that I didn’t have more once I finished (which has nothing to do with serving size, but rather my desire to keep eating). My friend enjoyed her custom Arepa just as much as I did. Needles to say, this experience is further encouraging me to try new food, and my friend and I are definitely adding Arepa Factory to our list of places to eat.

For more information on Arepa Factory check out their website: http://www.arepafactory.com

For more information on Turnstyle Underground Market at Columbus Circle check out their website: https://www.turn-style.com 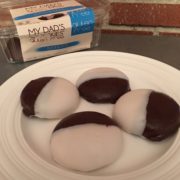 It had been a while since I had a really good black and white cookie. I used to love getting them as a treat, and would almost always pick one up when I’d see them on the counter of a deli, coffee shop, or elsewhere. However, once I became gluten free, I just could not find a good substitute for my once beloved treat.

Now notice I said “it had been”. This weekend, I found My Dad’s Cookies Gluten Free Black & White Cookies at my local Whole Foods. Not willing to give up my search quite yet, I decided to give them a try, and they are great!

The cookie was soft and cake-like. The texture was perfect, being a little bit dry but still soft, and the cookie held together well. The sponge cake cookie perfectly complimented the vanilla and chocolate coating. While the traditional gluten full cookies I remember have more of a topping, these cookies seemed to be dipped on either side, with chocolate and vanilla coating spilling over the edges. I really enjoyed this aspect of the cookie, and it made for a nice balance between the cake part of the cookie and the icing. 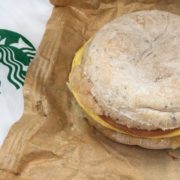 Starbucks has been a staple in my life for as long as I can remember. While I figured out long ago what my gluten free and safe for me beverages are, there have not always been many food options for me to enjoy. While I have heard that many Starbucks were offering gluten free food items, my local ones never seemed to have much beyond pre-packaged items found around the store, but not in the display case. To my delight, I recently started seeing the certified gluten-free breakfast sandwich, and could not wait for an opportunity to test it out.

The sandwich was good, and pretty much what you would expect from a breakfast sandwich. It featured cherry wood-smoked Canadian bacon, peppered egg patty, white cheddar cheese, and was served on a gluten-free roll. The ingredients in the sandwich are typical of this type of item, and not usually an issue for those avoiding gluten. However, what sets this sandwich apart is the gluten free roll. The roll was different from many other gluten free ones I’ve sampled in that it actually stayed together while I ate it. I can’t tell you how many times I’ve tried to enjoy a gluten free sandwich, and wound up eating it with a knife and fork because the bread just won’t stay together. This was not the case with the Starbucks breakfast sandwich. Everything held together well, and was delicious.

What most stood out though was that this sandwich was served warm. While this may not seem like a big deal to most, I learned long ago to be cautious when ordering gluten free items from similar establishments. Typically, when an item like this is warmed, it is placed in a toaster or microwave that is used for similar gluten-full items, and there is no caution given to making sure cross-contamination does not occur. However, Starbucks made sure there was not a chance of cross-contamination with this product. It was served to me completely sealed in its original packaging. The sealed pouch the sandwich was served in allowed for my sandwich to be warmed at Starbucks, and served to me without ever coming into contact with any potentially harmful gluten. Starbucks did a great job with this product, and I am so excited to have more options available to me at one of my favorite on the go establishments. 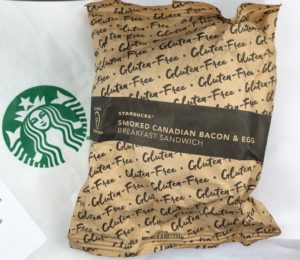 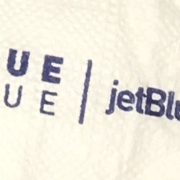 This post should really be called “Who to Fly”. Despite knowing I was receiving a complimentary snack and beverage on my recent Jet Blue flight, I still loaded up on airport snacks. I wasn’t quite sure what to expect, and wanted to be prepared in case those mid flight cravings or nerves hit. Stocking up was such a mistake! Jet Blue had multiple options including TERRA Sweets & Blues Potato Chips and PopCorners Popcorn Chips.

What impressed me the most during my flight was my Flight Attendant’s knowledge of the snacks available. When I asked to read the label of one of the offerings stating that I am gluten free, he immediately told me which of the options I could eat, eliminating my need to do my normal ingredient and package inspection. Needless to say, I was very impressed with Jet Blue’s preparation for their gluten free travelers, and I did not have to stock up on snacks before my return flight with the airline. Having gluten free options so readily available just added to an overall great travel experience. 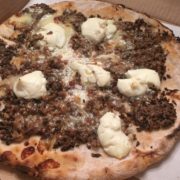 After hearing about Frankie and Fanucci’s for quite some time, I finally got the opportunity to try some of their gluten free pizza. We decided to order in for a recent family celebration, and after listening to my brother, who works in the culinary industry, rave about their pizza, Frankie and Fanucci’s seemed a clear choice. We ordered in from their Mamaroneck location, and were not disappointed.

While my family ordered a few different gluten-full options, I ordered a gluten-free Shroom pizza, which came as a personal size pie. The Shroom pizza, as stated on the menu, features chopped mushrooms duxelle, fresh ricotta, bel paese cheese, truffle oil, chives (no sauce). After all the hype, this pizza did not disappoint. The crust was cooked to perfection, being a little softer but still solid under the topping, with a hard crunchy crust bordering the pizza. The topping combination was delicious, and the truffle oil really added a great flavor to the pie.

My brother, the culinary guy, asked to try my pizza, and from the one bite which I would allow him, he agreed it was one of the best gluten free pies he’s tasted. Everyone enjoyed their meal, and the regular pizzas filled with gluten received equally as good reviews. I can’t wait to order from Frankie and Fanucci’s again, continue to try their many gluten free pizza offerings.

For more information on Frankie and Fanucci’s, visit their website at https://www.fandfpizza.com