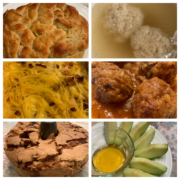 To those of you that celebrate, L’Shana Tovah!  Happy New Year!  Like most Jewish holidays, Rosh Hashanah comes with its own special foods and family traditions surrounding these foods.  Unfortunately, being gluten-free often means a lot of these favorites in their traditional form are off limits.

Before I go any further, I have to share that I do not keep Kosher or live in a Kosher household.  Many of these recipes and food combinations break some of the traditional rules and are made from ingredients that change the traditional food. What is featured are substitutions I had during the holiday in order to allow myself to be included in the celebration while enjoying some foods that my family typically eats during these special days.

Rosh Hashanah would not be complete without a round challah.  After buying a gluten-free one for years, we decided to try our hand a making our own.  While the result looks nothing like the traditional version, the taste is nearly identical to the best substitution I’ve bought at stores and bakeries.  This version was definitely denser and less light and flaky than a traditional challah, but the taste was great.

Of course, no Jewish holiday would be complete without Chicken Soup with Matzo Balls.  I know everyone thinks their version is the best, but it’s not.  My mom, using my Grandma’s recipe, makes the absolute best Chicken soup there is.  While I appreciate all of the good stuff that goes into the soup, I’m a little weird.  I love the flavor, but I hate the texture of all the stringy green vegetables floating around, so I strain my soup.  No soup would be complete without Matzo balls, and thanks to Manishewitz Gluten Free Matzo Ball mix, I was able to indulge.

Kugel, or noodle pudding has always been a staple at my family’s Rosh Hashanah table.  While usually made with egg noodles, my version was made with gluten-free spaghetti. Yes, this may seem like a weird substitution, but again, it did the trick of resembling one of my favorite holiday dishes.

Another one of my weird eating habits is stuffed cabbage without the cabbage.  Yes, this may seem like just eating meatballs, but I’ve always loved the flavor but disliked the cabbage.  While the original recipe has some gluten containing ingredients, this version of gluten-free stuffed cabbage meatballs was modified to eliminate all of the gluten.

This Apple Cake is another family recipe that was modified just for me.  The traditional flour was replaced with a one-to-one gluten-free substitute and it turned out great!

Finally, it would not be Rosh Hashanah without apples and honey.  Yes, both of these things are naturally gluten-free, but they are a very important part of any Rosh Hashanah dinner and blog post.