There is one rule I’ve always followed; special occasions call for special meals. Every birthday, holiday, milestone, and other celebration must be accompanied with a special dining experience. Recently, a good friend and I were celebrating one of these special occasions, which we accompanied with a very special meal at The Smith Restaurant and Bar. The Smith has several locations in New York City and DC, and on this occasion we dined at the Midtown, Manhattan restaurant.

Part of the reason why my friend and I selected The Smith was because we were looking to have brunch, and they have a fantastic brunch menu. As I do every time I eat a meal out, I pre-screened the menu prior to making a reservation. While the menu did not indicate which items are gluten-free, they had enough items that looked like they should be gluten-free, so I was comfortable with the choice. Once we got to the restaurant, I entered my usual routine of explaining my limited diet to the waitress, and asked for some advisement when it came to ordering. Instead of being given a few items to pick from, I was asked what I wanted, and was informed that almost anything on the menu could be modified so that I could safely eat it (In many cases this included removing a bread item, since they did not have any gluten-free breads available).

My friend had eaten at the restaurant several times before with her boyfriend, and told me that her favorite item was the Avocado Toast (which was one of the few items I couldn’t make work for me), and her boyfriend always raved about the Short Rib Hash. Knowing my friend and her boyfriend are foodies, I decided to go with the Short Rib Hash, and nervously asked by waitress if that was something I’d be able to safely eat. She assured me that they could do it, so I excitedly placed my order.

What happened next was awesome! A few minutes after ordering, the manager came over asking which of us had the gluten-free order. I nervously identified myself, expecting to be told that there was some mistake, and I would have to select another menu item. Instead, I was informed that they just wanted to ensure me that my meal would be prepared safely for me, and let me know about their allergy protocol. All items that are ordered with an indicated allergy or other restriction have a red flag placed into them. They wanted to make me aware of this so I knew to look for the flag in my food. If for some reason my food arrived without the flag, I should let them know immediately, and they would take care of it.

The last part of the manager’s message was unnecessary. My meal arrived with a red flag prominently displayed. Not only did The Smith provide me with a safe meal, they provided me with a delicious one! The portion was huge, and while I don’t normally eat a lot during the mornings/early afternoons, I finished the entire thing! The Smith has definitely made it onto my list (which it really more of a note in my phone) of go-to brunch spots in the city. 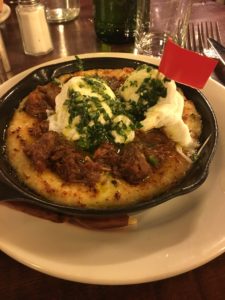 My meal arrived with a red flag clearly indicating that it was prepared with care for an allergy/restriction.

For more information on The Smith check out their website: https://thesmithrestaurant.com